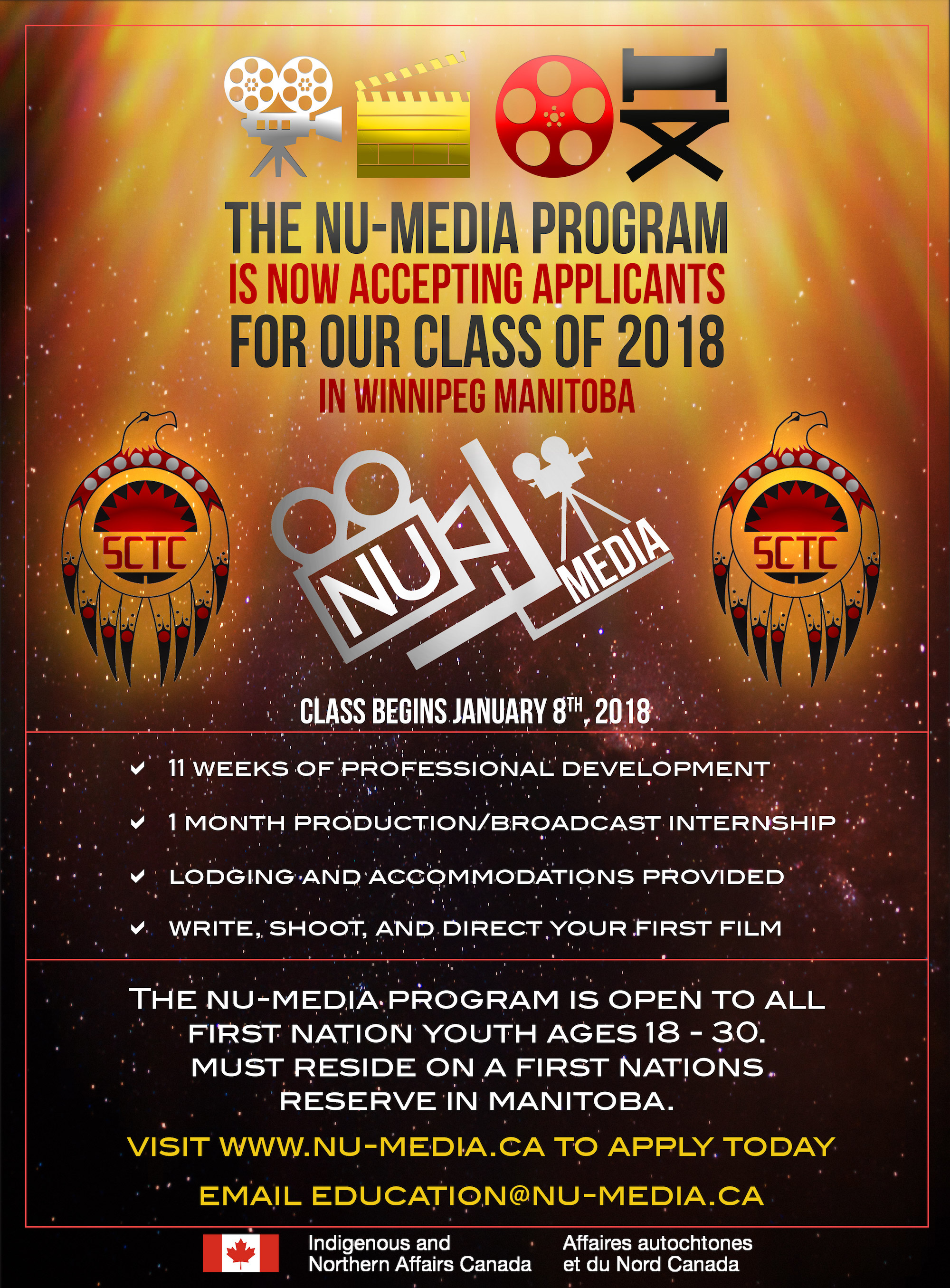 The highly successful Nu-Media Program in Winnipeg Manitoba Canada aims to increase the Indigenous youth residing on First Nation reserves across Manitoba to create job-ready, career driven individuals. This program draws upon the many centuries of storytelling within the Indigenous communities while developing a new, modern age storyteller. It is the hope and dream of our team that one day, every Indigenous community will have individuals who can utilize modern video, film, and Internet mediums to tell their stories, the stories that need to be told, all from an Indigenous perspective.

The Nu-Media Program integrates a comfortable, respectful, and healthy environment, with practical, hands-on learning that can expand into a lifelong career with endless potential. The highly experienced professional speakers provide continuous support to the youth that involved in the Nu-Media family, through our social media sites, our newly designed website, and ongoing personal communication.

Goals and Objectives of the Nu-Media Program 2018

1.     The Nu-Media Program 2018 aims to collaborate with Indigenous youth who are otherwise not working or actively moving in a positive direction due to lack of media opportunities, job opportunities, and who have an interest in one of the aspects of media. The Nu Media program will awaken the storyteller in each of the Indigenous youth between the ages of 18-30 and introduce them to a career in the media industry.

2.     Select up to 20 participants to attend a 3-month media program that will feature 20 media professionals and special guest. The Nu Media students will learn from industry professionals with the experience of reaching for and achieving careers within broadcast and multi-media platforms from a story-telling perspective.

3.     The Nu-Media Program 2018 will produce two broadcast quality films that be shown publicly by a recognized broadcaster or film festival. These learning experiences will provide lasting contacts and career opportunities for the participants selected to be involved for a solid foundation for a career in media.

4.     The Nu-Media Program 2018 will ensure that each of the students selected will leave with the necessary qualities to have success and achieve the goal of with a company of their own choosing for a internship. 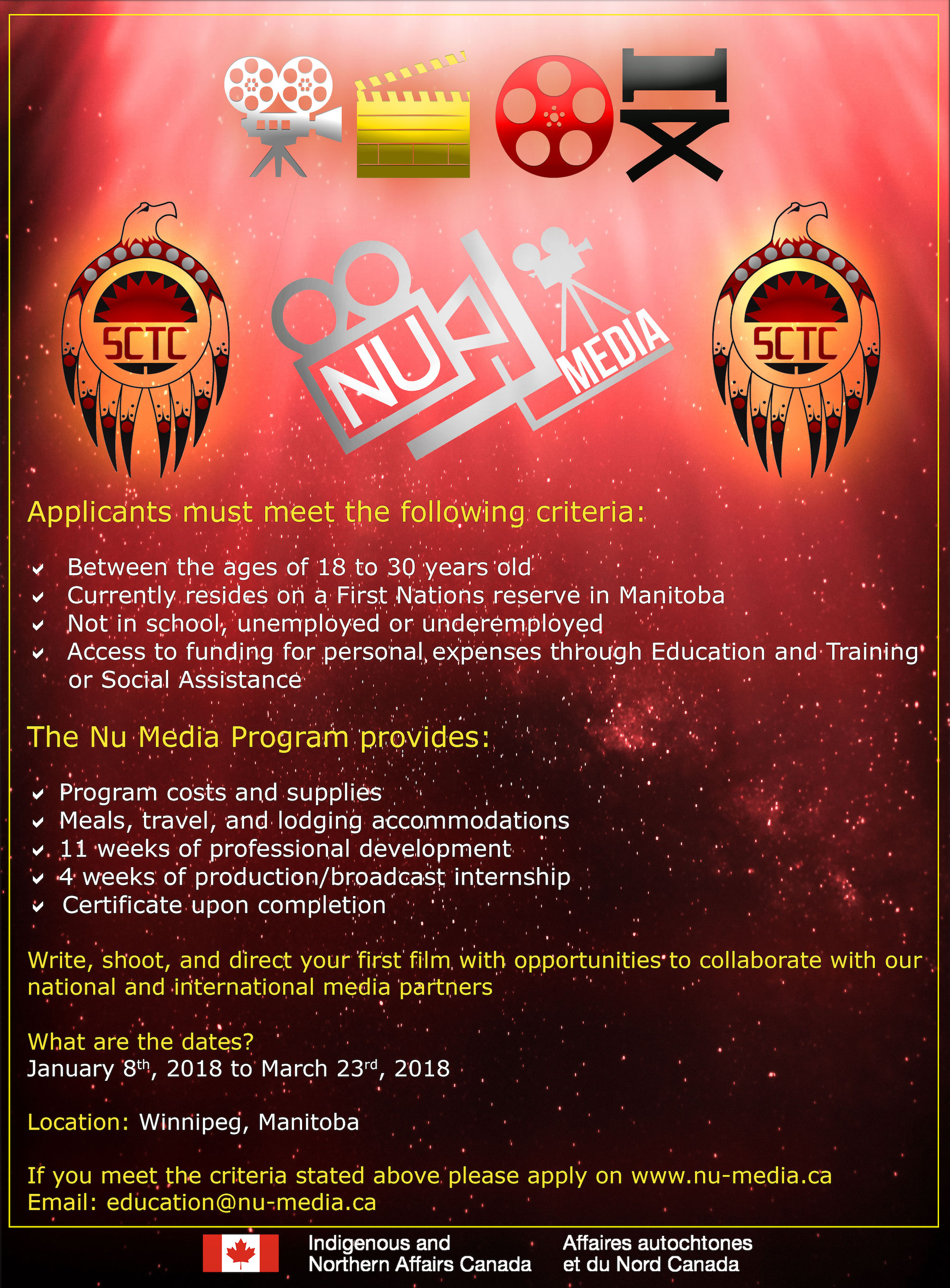 The Nu Media Program started in January 2013 and with 8 students who were eager to explore the art of filmmaking and with the help of the Nu Media faculty produced 4 videos. In the following year, the program’s participant intake almost tripled, and 24 participants came to Winnipeg and took part in the 11-week training program. They completed a total of 6 student films including an original music video, two short documentaries, and various comedic and dramatic short films.

The instructors share their personal experiences from their past and demonstrate how they have overcome difficult obstacles with alcohol and drug abuse, depression, suicide, family and intergenerational violence. They can relate to a lot of the youth struggling with similar difficulties but create a safe and inviting environment and prove that these issues can be overcome, with hard work, dedication, and allowing yourself to heal through a positive and creative element.

The youth who have participated in the program were immersed into the world of multimedia and provided with the opportunity to learn first hand and work with over twenty industry professionals.

The Nu Media Program has been widely successful with many of the students interning with various film production, and media companies after the program finished, and even a few of them returning to post-secondary institutions, and becoming employed within their respective internship placements.

In the first year of the program, the students, along with the 4 films, also created 2 iOS applications, interned with industry professionals at MidCan for their final projects, and 2 of the students, (Randy Sutherland and Rannon Wilson) were entered into a National competition and enrolled in the National Screen Institutes: New Voices program.

In the second year, the students created 6 short films, interned at over 8 different production companies, and broadcasters throughout Winnipeg, they all received their on set etiquette training and are certified to safely and properly work on any film set (certification received through On Screen Manitoba), and many returning back to post-secondary education, or now employed by their respective internship placement.

The desired outcome of the Nu Media Program: Year 3, would be for a minimum of 25 Youth to improve upon their all-ready developing skills of video, computer, Internet, and storytelling. Increasing capacity within the participants and introducing each student to the Multi-media industry as a career choice. We will aim to combat the many struggles that youth face today by providing them with a healthy, inviting, open, and honest creative environment, where many of the traditional aboriginal practices will be honored and used daily. We believe that having weekly sharing circles is beneficial for the youth to share their thoughts and feelings in a safe and secure environment.